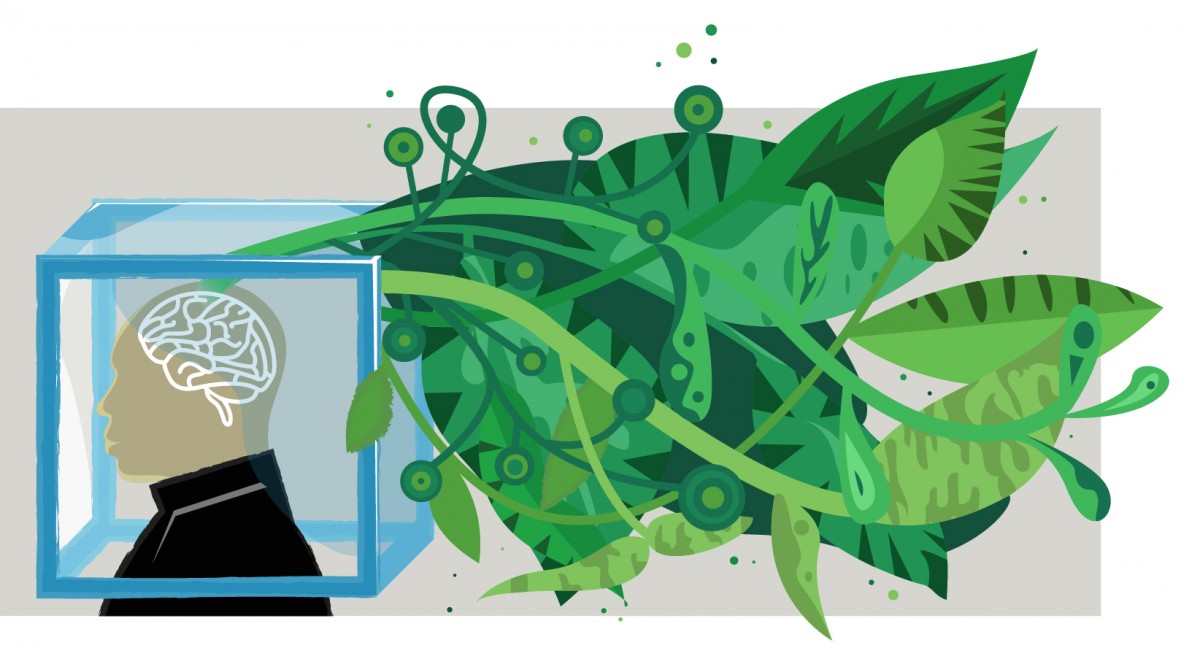 In the last post, we talked about how language can both shape as well as describe our reality. This is vital when an organisation wants to create real and sustained change – visualising new possibilities, choosing one and moving hundreds or thousands of employees towards it successfully– so let’s explore the idea of reality a little further. Where do our embedded ideas come from?

We tend to create the framework for our own reality based on past observations, experiences and reflections. We do this using a language that has helped us understand this state, enriched with further meaning and credibility through dialogue, shared experiences, and discussions with others.

The limitations of this process are clear. If we remain in equilibrium, constrained by our own perception of reality, then where do breakthroughs come from? What must happen to break our own alignment with conventional wisdom and follow another train of thought, and then allow others to understand it and (potentially) embrace it? It is at this point some might begin talking about ‘creativity’ and ‘brainstorming’, but many attempts at creativity in problem solving or in innovation remain framed – and as such constrained – by existing ideas of reality. Before we look at creativity our next post, we first have to deal with the idea of paradigm shifts.

Breakthrough thinking requires challenging our acquired knowledge. Without getting too deep into theory, for now we will say that to experience a breakthrough, we must be open to questioning what we think we know and the way we view the world. We must also accept our personal or organisational ‘fog of war’ – the things we are as yet unaware that we don’t know – and that whatever is in there could potentially be exciting. Engaging with our ignorance as something positive allows us to unlock our curiosity, so that we may actively seek out novelty, experience and new interpretations, which gives us the power to embrace a new paradigm of ‘possibility’.

Possibility are the things that may or may not come to pass. In any one given situation there could be many different outcomes, but we limit our choices as human beings and as communities, often because we work on options grounded in our past and by a communal agreement on what is, and what is not possible.

Challenging a communal agreement opens up the challenger to risk, whether purely reputational or much worse than that… Consider, for example, that at a time when conventional wisdom assumed Earth to be the centre of the universe, Galileo Galilei reported his discovery that the centre of the universe was, in fact, the sun. In doing so he was stepping out of a community of agreement to introduce a new possibility – opening a dialogue that challenged ‘reality’. Unfortunately, Galileo’s new ‘reality’ fundamentally disputed established teaching, and his refusal to recant his theory meant he was imprisoned by the Inquisition for the rest of his life.

Many other eminent scientists have gone on to make discoveries that became accepted as natural truths, but were subsequently disproven. Isaac Newton’s theory that light was composed of particles, for example, was accepted as fact until 100 years later when Thomas Young discovered that light spread as waves and opinion changed. Subsequently, Einstein came along with his famous e=mc2 equation and told us that light travels in waves as particles. We do not ridicule Newton or Young for being ‘wrong’ of course; each scientist made his own contribution to our evolving understanding of physics, a discipline where the most renowned thinkers are constantly open to extraordinary and as yet unimagined possibilities. Other disciplines would do well to learn from this approach.

From reality to possibility

Practically speaking, how do you shift an organisation’s paradigm from one of reality to one of possibility? We firmly believe this is not the job of a single leader. Rather, leaders must harness the combined strength, intellect and imagination of their people. By bringing many voices together in conversation and collaboration, the realm of possibility is greatly expanded and the ground is laid for exploration, experimentation, inquiry, trial and error and ultimately, triumph.

Once you have assembled the right people – people who know, people who decide and people who do – and you know the questions you want to answer, the next step is to carefully design the conditions for having necessary conversations. There are many different kinds of conversations, each of which serves a different purpose. The conversations that can be had between two people are different to those had within a small group of eight, and different again to those of a larger group, different yet again to those held in person and, indeed, virtually. It is likely that a mix of all of these, carefully structured and using appropriate language, will move you from ‘reality’ to ‘possibility’. Design thinking helps establish which conversations must be had, with whom and how, in order to achieve the possible and to unlock the Group Genius that leads to breakthrough ideas.

Possibility, and knowing that there are in fact multiple options, also suggests the necessity of making choices. It is sometimes harder than we think to accept we have choices to make, as this also imposes the requirement of taking responsibility. The next question becomes, ‘how do we make the best decision?’ and the answer is creativity.