Setting the Stage for Creativity 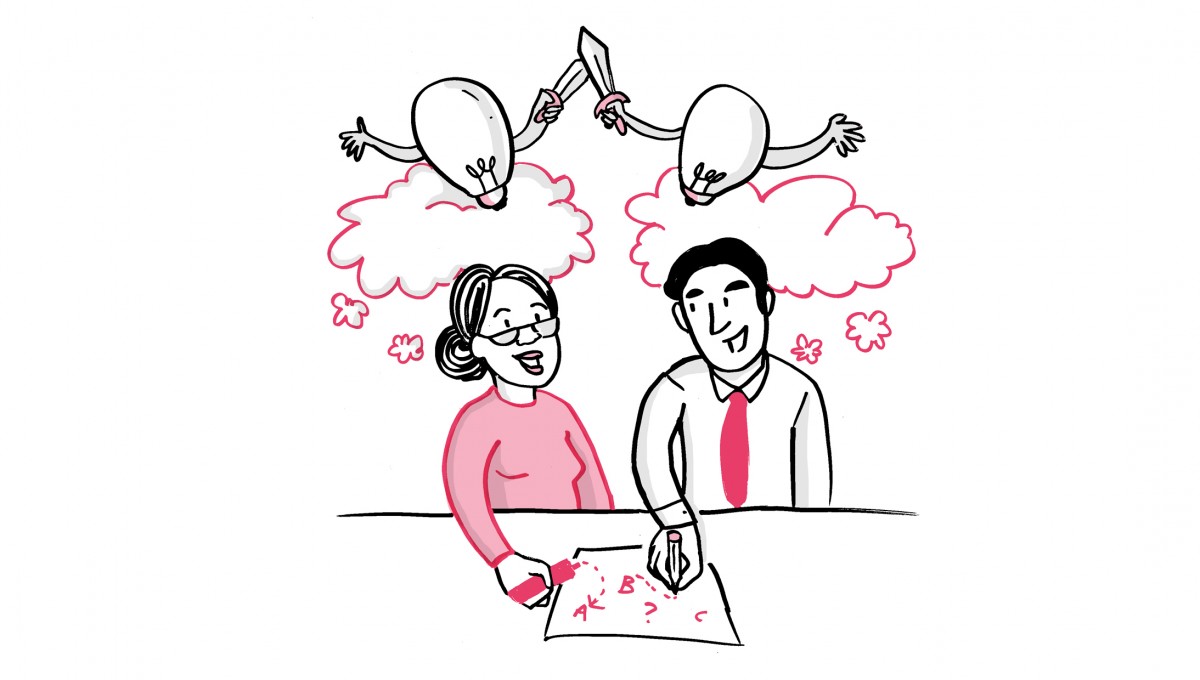 What is the best template for creativity? Is it a tortured solitary genius focused on the personal struggle for inspiration, or a group of ad men flinging ideas onto a board in a flurry of brainstorming? Is it a chamber orchestra performing Bach together, or is it a five-year-old child with a brush and paints? We know the most significant trend in human creativity in recent years has been the shift from individuals to teams. The modern workplace has been designed to move away from a traditional ‘hive’ set up to the more teamwork driven ‘den’, where free communication supports cross-functional, connected, silo-free work. We use tools such as Slack and Basecamp to connect our workflows, and working together on big projects has become the rule rather than the exception. But even though we are working together, is the work better?

The answer lies in the way the teams are working together. There is a tendency to look at the output of a team that is generating a lot of ideas in a non-judgmental, uncritical way — no idea is a bad idea — as being very productive. And it’s true that a team that is cooperating in this way will deliver an abundance of possibilities and possibly finish the project quicker than a single person working alone. However, a team that is debating, challenging, building upon one another’s work and questioning the ideas presented will produce more creative ideas of higher quality because critique allows people to dig beneath the surface and come up with ideas that aren’t predictable. Creativity is ignited when diverse ideas are united, or when ideas from one domain influence those of another, which is the true meaning of collaboration. We said in a previous post that creativity is the process of eliminating options; through collaboration this is not achieved with voting but with hard-won convergence. A team cooperating will make light work of solving a problem. But a team that argues, influences on another, inspires and connects—collaborates—will achieve a more satisfying result.

So, what is the perfect template for a collaborating group? Many years ago, I worked in the theatre, as an actor, designer, and artistic director of a theatre company, and believe one of the best models of group collaboration comes from the Broadway stage (stay with me here). I can tell you that no matter how ambitious you are, no single person can create a Broadway show—there are simply too many different kinds of talent required: a composer has to work with a librettist and a lyricist, a choreographer has to work with a director who is probably getting notes from the producer; there must be actors, an orchestra to play the tunes, and a small army of designers and craftsmen who bring the world of the play to life. And the most important collaborator of all, the audience, whose reception of the work can change the entire course of a production.

Setting all the razzamatazz of Broadway to one side, play-making at its core is an important collaboration between the actor and the text and music. The playscript sets out the words and the score sets the music, but neither is meant to live on the page—it is the actor’s voice which brings them to life. And when both are put before an audience, who receives it in a certain way—boom! Something new is created. Not completely of the playwright, not completely of the actor, not completely of the audience, but something wholly of each. To add further complication, a successful production must be financially viable as well as artistically creative, and each party involved in the making of it has his artistic reputation riding on the outcome of every performance, so the stakes are high. A forgotten line, a missing prop, a door that doesn’t open, or a wardrobe malfunction can stop a show, and that is a risk no one is willing to take.

Successful collaboration in the theatre also relies on the interconnected webs of people in the relatively small universe in which that world revolves—there aren’t many degrees of separation between Kevin Bacon and anybody, or between the librettist of “Guys and Dolls” and the choreographer of “Cabaret.” In my experience, certain directors often chose to partner with an artistic team they had worked with before, a pattern often repeated in theatrical collaborations, as producers view “incumbent teams” as a safe financial bet (Elton John and Tim Rice, I’m looking at you). However, intimacy with an artistic collaborator doesn’t always guarantee success, because knowing each other too well could mean that ways of working become stale. The opportunity for real magic happens when a new variable is injected into an already established collaborative relationship—a new set designer or an unknown actor, or possibly even when an old team works on a debuting play—when fresh thinking challenged already established ways of working. A famous example of this collaborative alchemy is the creative team behind “West Side Story,” one of the most commercially and artistically successful Broadway musicals of all time. The concept of a musical based on “Romeo and Juliet” was the brainchild of composer Leonard Bernstein, playwright Arthur Laurents and choreographer Jerome Robbins—all Broadway legends—but the project, in 1957 a departure from theatrical conventions both for its focus on social problems and its extended dance scenes, made history thanks to the fresh talents of 24-year-old Stephen Sondheim, a then unknown lyricist who had never worked on a Broadway musical before.

Can collaboration work with other types of team work the same way it works in the theatre? Of course, because on any given project the high stakes are the same—it must be completed, the reputations of the people working on it depend on its success, and each person involved will have a view on the best way to deliver it. Assemble a team with strong opinions and a defined amount of time, stimulate conversation, criticism and conflict and fruitful interactions will happen. And do this in a communal space—large and open so that any one person can talk to another, but not too precious that it can’t be altered as necessary. From the Cavendish Laboratory at Cambridge, the National Theatre, Building 20 at M.I.T. to the public spaces at Pixar, the most creative environments provide opportunities for one idea to bump up against another.

Bit by bit, putting it together, diverse teams trust each other to work in parallel, the only way to make a collaborative work of art. Whilst in the theatre the entities are all answerable to a director with a vision for how best to serve the play (and who in turn is answerable to the opening night audience), at work we look toward project owners and visionary leaders to provide clarity on objectives and help guide us toward success. Having just a vision is no solution, everything depends on execution, and in both worlds, failure is not an option.

The lesson we can take from the theatre is that when there are enough people with different perspectives and skills influencing one another in unpredictable ways, the group dynamic will inspire excellence from each person working to put the show on the road. In this creative process, every moment makes a contribution, every little detail plays a part. All those hundreds of micro-interactions add up…but don’t expect them to be without friction. In fact, the challenging conversations you’ve been avoiding so long could well be the most important part of the process. They might be confrontational and not always pleasant, but it doesn’t mean they can be avoided: collaboration is not about getting along, it is about getting it right.

Described by GQ as the ‘management consultant of the future’, the Innovation Arts team is a mixture of strategists, management consultants, designers, advertisers, branding and communications experts and artists, all skilled in helping organisations make change happen. It’s a unique blend that helps an organisation think differently about the challenges it’s facing, as well as address them.

Based on their experience of working repeatedly with some of the leading FTSE100 and Fortune 100 companies, governments and civil society organisations, their clients engage them because they deliver systemic, high-quality, sustainable outcomes with less risk, more certainty and in a fraction of the time compared to conventional approaches.