Making our bold moves with tedxteen

When you are called in to work on a Saturday, it’s lovely when it doesn’t actually feel like work – luckily, TEDxTEEN can be depended upon for fun, excitement, and inspiration. So, Saturday June 24th, our scribes happily travelled down to the 02 – coffees in hand – to capture the rich, diverse and always impressive stories of TEDxTEEN London 2017 as an Infomural.

This year, the theme was “bold moves” and showcased the bold endeavours of a diverse group of teenagers. Promotion for the event read:

“We have never been more connected, more innovative, or more resourceful. We have also never felt the weight of the present and future more than right now.”

Accordingly, there was a serious but hopeful tone to the talks. We heard from youth grappling with prejudice, mental illness, isolation and death – sharing stories of what it means to be a teen, maturing and learning to cope with realities from which we are sheltered as children. 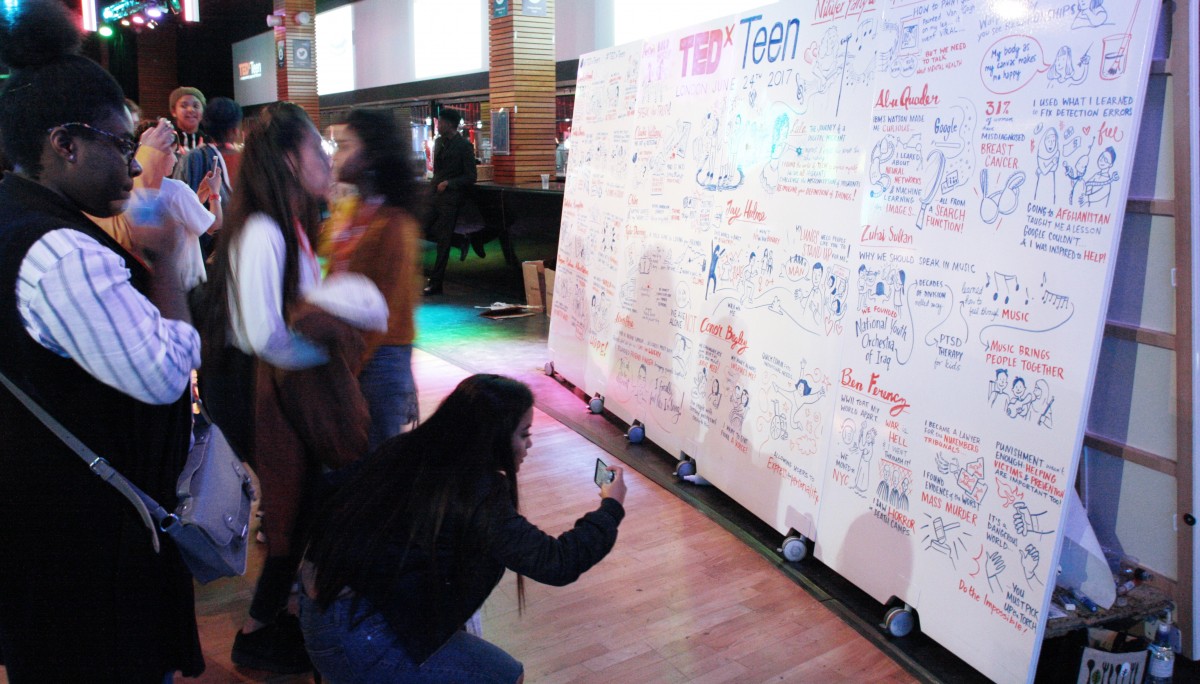 Each one of the speakers had a positive strategy for dealing with personal and global pain. We heard from a young Syrian refugee who, despite odds and parental hair-tearing, managed to carry her school books across borders to ensure her education. We heard from a young girl, mercilessly bullied and abused, who had channelled her experience into the creation of an app that allowed other isolated youth to find peers to sit with at lunchtime. We heard from a self-taught computer-scientist who’s personal experience in Afghanistan inspired him to create artificial intelligence for improved breast cancer detection.

The event opened with a reflection upon every participants place in a historical chain:

“We are here today, in this moment on this planet, as a result of decisions that humans have made every year, month, day, hour, minute and second that have come before.”

It was only fitting then the day should conclude with a voice from the past: Ben Ferencz, the last surviving prosecutor from the Nuremburg Tribunals, joined via skype to share his experiences, fears and hopes for the future. He addressed his audience directly and with respect, speaking to them not as children but as bourgeoning adults about to take on a world of responsibility. Ferencz metaphor of passing on the torch of humanity and progress to this new generation had a clear impact. From the speakers we had the pleasure of listening to that day, we can think of no better a group of young people to rise to the challenge Ferencz’s described.

David, a committed ‘TEDster’ was over in Long Beach in February to attend the main TED 2013 Conference. His journal entry ‘What I learned at TED’ seemed popular with our friends who subscribe to our newsletter (subscribe here) so we thought we’d put it up for everyone to see.

It’s now coming up to two weeks since TED Long Beach came to a close. Under the banner of ‘The Young. The Wise. The Undiscovered.’ It promised much – and certainly delivered. What follows is a brief synopsis of what I feel are the key takeaways and ideas to amplify. Please take a look for yourself on the site – the talks are still going up but I’ll reference them where I can.

Lesson Number One: There is hope for the human.

Depending on where you stand on this debate there is good news – or there is bad news (thank you Juan Enriquez for the suggestion). Basically it would appear that we’re getting better at prolonging life. Larry Brilliant tells us that, through collaboration and concerted effort, we’re finding new diseases quicker, giving us a better chance to spot pandemics before they become dangerous. Scott Noggle talked about how we should pay attention to stem cell research – it may be our only hope in tackling, for example, Alzheimers – something that, it is estimated, 1 in 3 of us will have by the year 2050. We’d also do well to train our Amygdala – that part of the brain that looks after, amongst other things, emotion, suggested Daniel Reisel. Recent studies in neurogenesis have given us insight as to how we might do this – and therefore influence our moral compass and ability to empathise. You know, be human… And it seems relatively simple – a more enriched environment (architects, builders, designers, mothers, fathers take note). And when it comes to death, we’d do well to prepare well for it. Judy Macdonald Johnston talked about how we should look to create a good (end of) life through planning for it carefully – that way we can retain a high quality of life – with dignity – despite the decline in ourselves. And if it all goes wrong, there is always hope for us to make a comeback. Stuart Brand spoke on how we are looking to bring back extinct species through regeneration. It’s coming (actually it’s here). Jurassic Park fans, be careful of what you wish for…

Lesson Number Two: There is hope for humanity.

We need education – but we also need robots! With Stuart Firestein encouraging us to embrace not-knowing and ask better questions in our quest for understanding, we were told that there is such a thing as high-quality ignorance. My take-away… Children would be better prepared in the pursuit of ignorance than in the pursuit of knowledge. Freeman Hrabowski agreed – rather than asking our kids if they had a good day at school we should be asking them if they asked any good questions. But our learning also needs to take in community, teamwork and individual and collective responsibility for performance. Sougata Mitra explained that the world’s ‘education system’ still follows the model designed by the British Empire to feed the bureaucratic administrative machine that was. And is no more – leaving the system and the model obsolete. He asks ‘is knowing obsolete?’ and what does this mean for the creation of a true ‘learning system’? Sougata argues that technology sets learning free and that we should set it in motion and then get out of the way – with the exception of giving love and encouragement. Incidentally, Sougata won this year’s TED prize – he is looking to build a self-organising learning environment, a school in the cloud, basically – and it’s everyone’s. Please take a look at the talk and join in. Andrew McAfee brought us the good news that with all this (non-) knowledge and understanding we will free ourselves of drudgery and toil. But only if we equally embrace androids. With androids we will increase output, decrease costs giving us an abundant life. But, suggested Eric Brynjolfsson, only after we’ve reinvented how we organise ourselves around the advancements in technology – no mean feat given it is leaving us behind. The solution? Back to Freeman Hrabowski – teamwork. Better teamwork, in fact.

And on a final note in this lesson, Bono told us we that we are on a good trajectory for eliminating extreme poverty by 2030. But also that this does not mean we can let up. If you’re in, join up with the ONE campaign.

Lesson Number Three: There is no hope for Democracy… At least in its current form.

We also heard how democracy – or rather democratic systems – really need to be kept it check. Whilst Bono pointed out that the ‘power of the people is stronger than the people in power’ it also seems that we need to re-evaluate the ways that power is both given and managed. Larry Lessig’s incredible talk on corruption and systemic failure in the US political arena must be seen (when it goes up). Do we really have a functional democracy when 60% of electoral campaign funding is allowed to come from just 132 people? And what about those senators who can comfortably move into the business of lobbying when they leave the senate? We need reform – and a government that works. This underlined the irony of the first talk of TED 2013. We had Senator Jennifer Granholm encouraging people to bypass Congress and create a bottom-up movement to break the increasingly gridlocked political structure. Her big idea was to use the private sector to come up with ingenious ways to solve complex problems such as clean energy, with governers competing for federal dollars to incentivise the innovation. The idea of play – competition, if you must, to solve the challenges we face is becoming more apparent to me. Anyone for tennis?

Lesson Number Four: There is hope for the planet.

Whether it be climate change or energy, there are clear signals that all may not be lost. Allan Savory gave a remarkable talk on how climate change might be stopped and even reversed if we pay attention to the grassland ecosystems around the world, arresting desertification and increasing the capacity of the world’s ability to breathe. And it all begins with livestock. In terms of energy, there’s hope – albeit in nuclear form – from wunderkind Taylor Wilson (he of nuclear fusion in yer garage fame). This time around he described a fission reactor that would run on decommissioned nuclear weapons, be buried underground and require refuelling only every 30 years. It’s also incredibly more efficient than current reactors – and safer as it is underground. Watch this space – he’s given himself 2 years to get his first prototype out (and will still not have celebrated his 20th birthday)! But there is also hope coming from the build environment. Given estimates that by 2040 75% of the population will be urbanised there are big challenges around materials, for example. Michael Green spoke on the advancement in wooden buildings – and predicted skyscrapers of wood. Or rather announced them – there’s already a 9-storey residential tower in London (actually 50 metres from my home – and I never even knew).

So that’s my 5 days very heavily summarised into something digestible. There were loads of other learnings (like we should all be learning how to code, not studying for that MBA – Susan Kish), insights (why did I struggle to get to grips with writing Chinese during my 3 years living in Beijing when I could have found a simple system such as ShaoLan’s Chineasy) and great quotes (South Central LA – home of the drive through and the drive by… Trouble is the drive through is killing more people – Ron Finley, Guerilla Gardener).